Our events team specializes in creating beautiful flower arrangements for corporate events in London as well as rest of the UK. Call us if you have any questions or wish to discuss your floral requirements for an event. 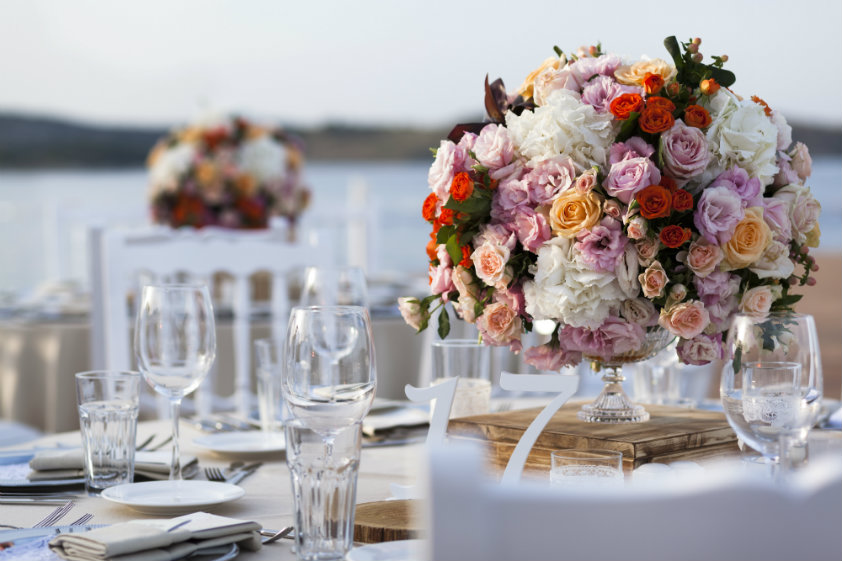 Every event we cater for is, by its nature, a truly unique event with its own combination of elements that separate it from any previous events. However, there are some cases which due to their extravagance, tend to stick in the memory. On such occasion, we designed and arranged several table displays for a wedding party that requested giant, spherical mixed rose bouquets to be placed in ornate cut glass vases. We encountered some problems initially, as the logistics of arranging bouquets in shallow vases caused us difficulty until we agreed with the bride and groom to use oasis balls in order to hold the flowers in place.

The flowers themselves were an explosion of colours and textures including red, pink, spray and Austin roses combined with large white hydrangeas. A cacophony of lavish, exploding proportions, with heads hanging at different levels and sprouting vividly from the vases, these spheres were a spectacular addition to the main event and drew inspiration from the cascading white water of river rapids. The mix and match approach, coupling roses that would not usually be applied together added an extra dimension to the arrangements, allowing our florists to experiment and run a certain amount of trial and error in their search for a quality combination. Once, however, they had struck on the perfect ratio of roses and hydrangeas, there could be no doubt as to the beauty of their creation.

This kind of experimental element of our practice at Flower Station means that whatever the occasion, whatever the idea in your head, we have the florists capable of bringing it all to fruition. No matter what your requirements, we will strive to accommodate you and bring to life your vision 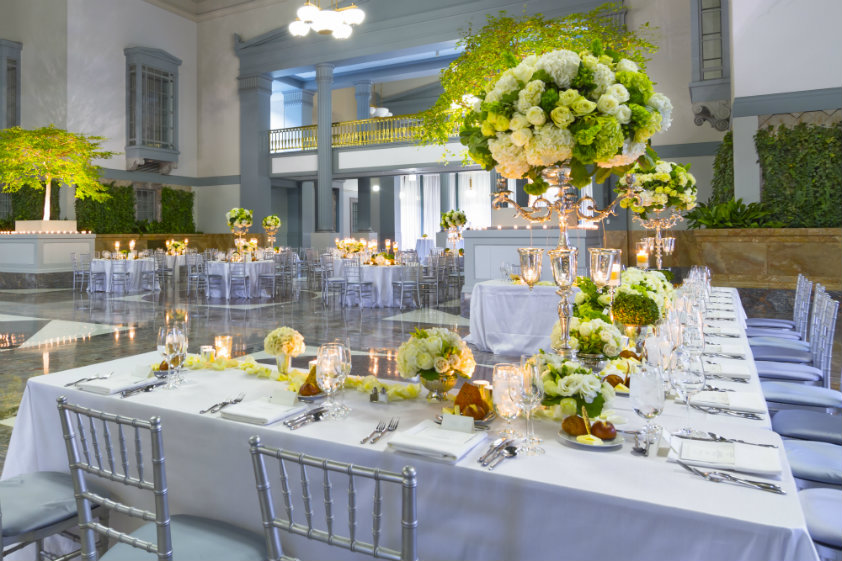 Creating vivid and visceral designs, our florists love to demonstrate the myriad possibilities of floral art with various arrangements of differing size and formation. Here, for example, we were tasked with producing a whole series of floral decorations for a large banqueting hall which contained a large ‘head’ table and over fifteen smaller guest tables. To avoid unwanted uniformity, our team used two large candelabras to focus attention towards the main table – and the bride and groom – while much smaller arrangements, hand-tied and placed in metal vases, brought the overarching theme together.

In order to add even more vibrancy and texture, we used single heads of hydrangeas in vases as a way to substitute for other, more cluttering decoration and to give the whole atmosphere a sense of abundant nature. Unusually for a wedding, the colour scheme was yellows and light pinks, meaning we relied heavily on beautiful yellow roses as well as pink hydrangeas and calla lilies. The severity and imperious nature of the space, with large neo-classical columns and a huge, cavernous ceiling made height and volume of the utmost importance and we tried to use the space to our advantage, creating the large, bulbous designs positioned on top of the candelabras. Rather than competing with the surroundings, these arrangements reflect and actively mirror the dramatic setting, acknowledging the space while not letting the flowers become dwarfed by it.