Everyone knows their zodiac sign and some more than others believe in what the stars are telling about them. You may even know what your birthstone is, but did you know that there are also birth flowers which have their own special meaning? Knowing all about birth flower meanings can come in very handy when choosing the perfect  birthday flowers to send to your loved ones. So here's our guide on every month's birth flower and what they symbolise! 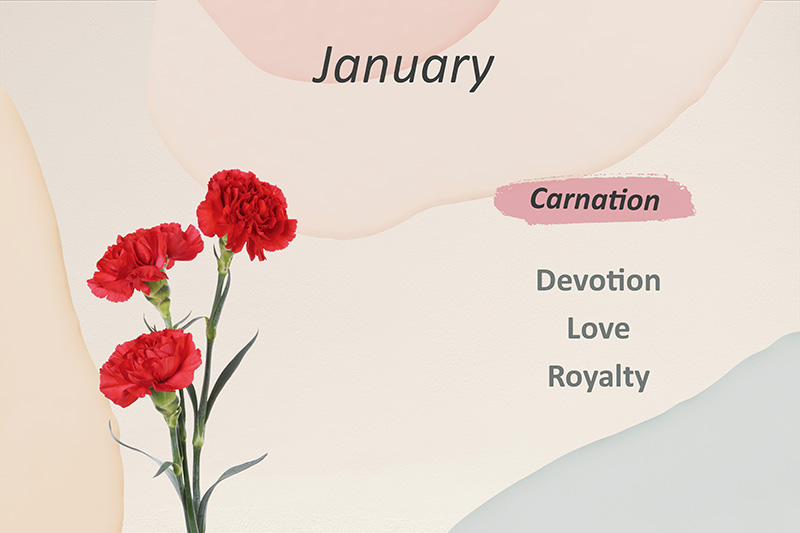 The January birth flowers are carnations and snowdrops. They’re two of the very few flowers that thrive in the cold winter season. Their ruffled, colourful blooms are symbolic of devotion, love and loyalty.

The second birth flower of January babies is the snowdrop, a flower that also blooms during the months of January to March. Wild snowdrop typically grows in large patches and resembles a field covered in snow. These flowers symbolize rebirth and hope — how fitting for the beginning of the year! 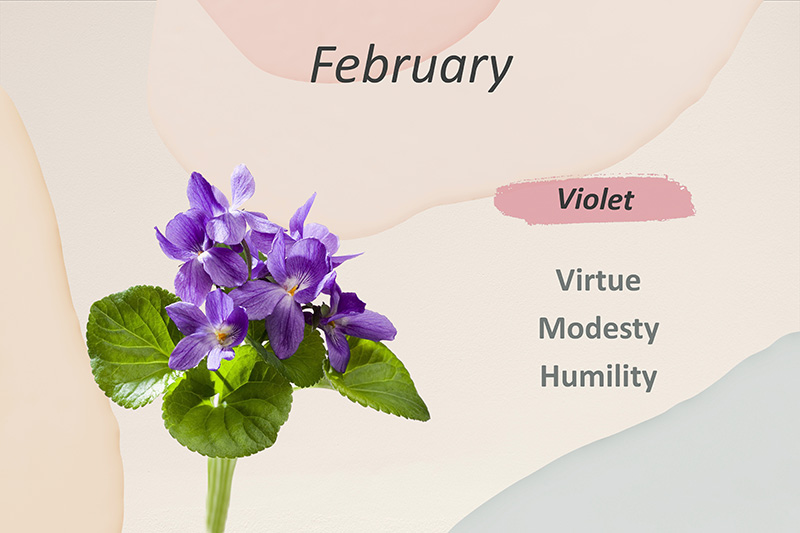 Violets are named after their blue-purple color but they can also be found in yellow, blue and cream colors. They are symbolic of virtue, modesty and humility. The flower has heart-shaped petals, which many believe to be the reason why they were used in love potions.

Primrose flowers are symbols of youth, young love and everlasting existence. The word “primrose” derives from the Latin word “primus” which means “early” or “first”, implying that the primrose is the first flower to bloom in spring. 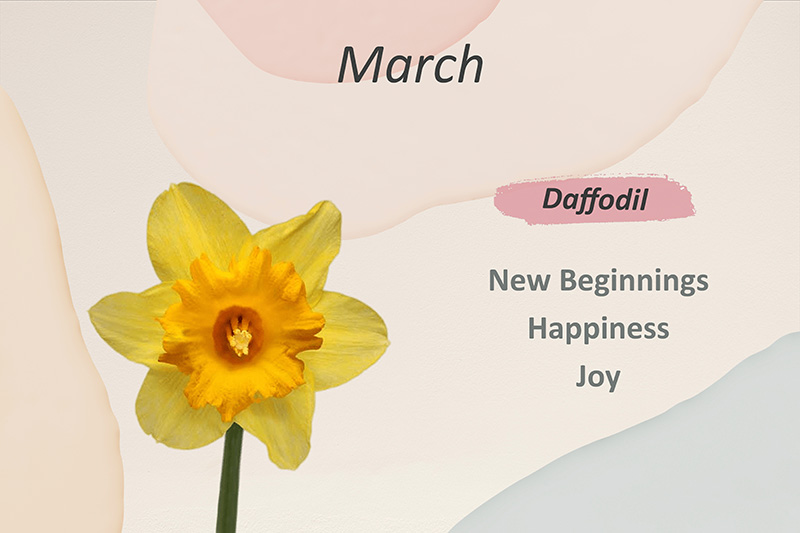 As March is the month where spring officially begins it makes sense that the daffodil is the primary birth month flower for March. These bright flowers are seen as a sign of good luck and celebrated in Wales as the national flower. Varieties of daffodils, also known as jonquil, vary in color, featuring white, orange and pale yellow blooms. Because they bloom in early spring, they symbolize new birth, beginnings, happiness and joy.

The humble  daisy is symbolic of purity, innocence and loyalty. It’s also believed the daisy is a symbol of motherhood, which is why the flower is often gifted for Mother’s Day.

Sweet peas are known for their sweet fragrance, and are a great way to make your home smell like spring!

May: Lily of the Valley and Hawthorn 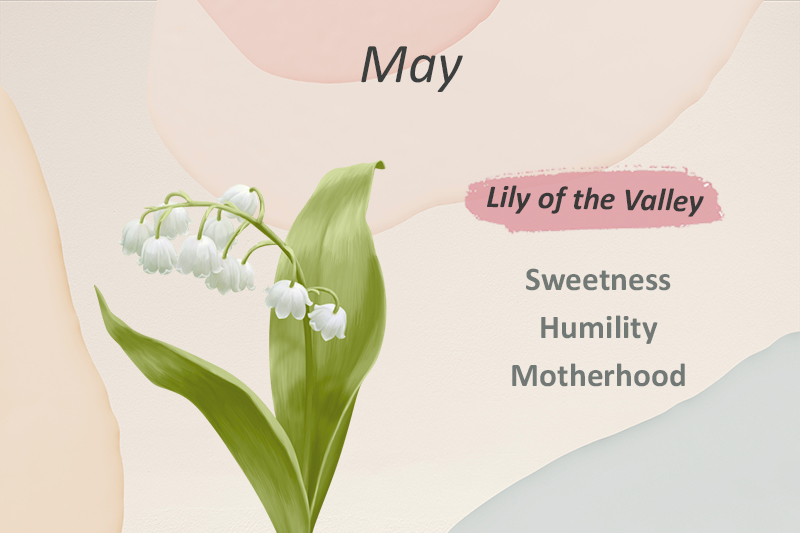 Lily of the valley is a delicate flower of small bells, and is a symbol for sweetness, humility, and motherhood. They are suitable for a Mother’s Day bouquet or a birthday gift for your mum. Well-known for its bell-shaped white flower heads, Lily of the Valley is often used in wedding bouquets.

Another May’s birth flower is the Hawthorn. It’s a small, unique pink or white flower which berries are sometimes used as fillers in bouquets. 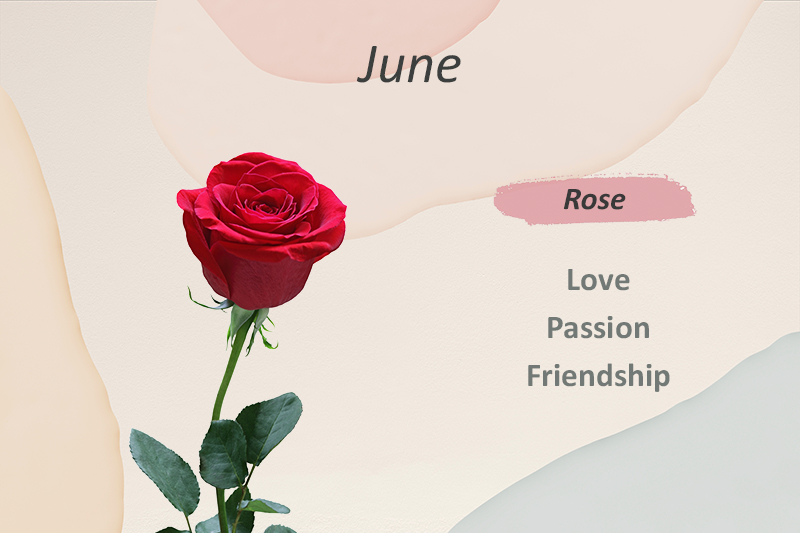 People born in June can brag they have the most popular birth flower - the rose. Roses are long cherished for their elegant, classic beauty. The ancient Greeks and Romans connected roses to love and passion. Although this flower is symbolic of love, its meaning can vary depending on the colour. For example,  red roses mean romantic love, while yellow ones symbolise friendship.

Honeysuckle flowers are loved for their sweet-smelling yellow, pink, or white flowers. They grow on shrubs or flowering vines and attract butterflies. 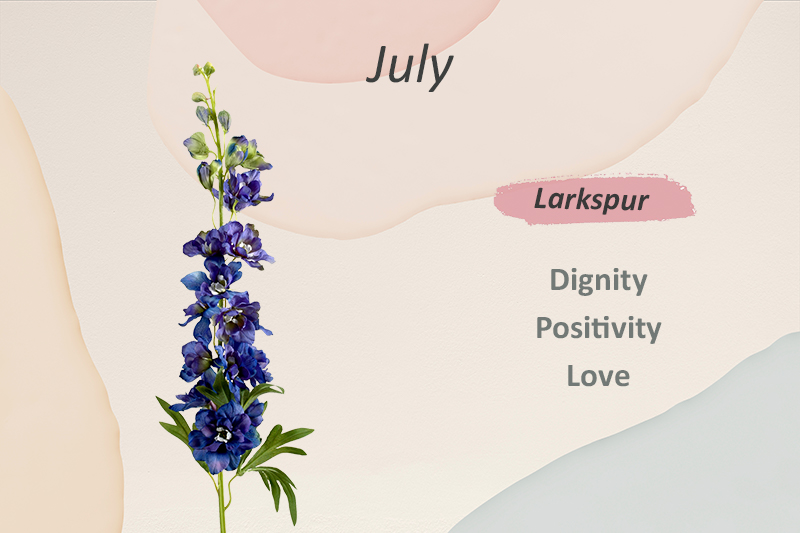 Larkspurs come in a wide range of vibrant colors including indigo, purple and pink. Larkspurs symbolize dignity, positivity and love. They're also a classic, British bloom and can be found growing wild in many woodlands across the UK.

Although their name would imply differently, water lilies are not a type of lily. These beautiful freshwater plants take their meaning from Hindu and Buddhist traditions. They are a symbol of innocence, purity and fertility. 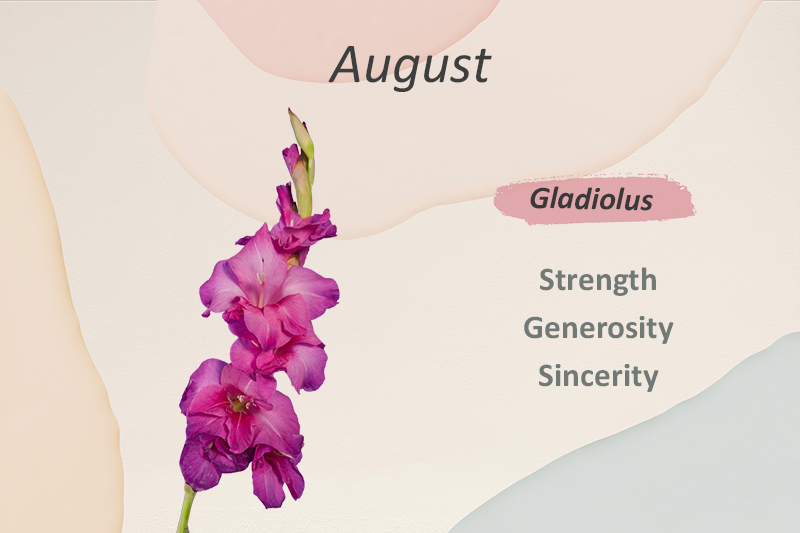 Gladiolus, a long, skinny-shaped flower that is sometimes ascribed to as the Sword Lily because Victorian romantics believed Gladiolus were able to pierce people’s hearts with their beauty. Gladiolus vary in color including orange, pink, purple, red, white, and yellow. It's a symbol of strength, generosity and sincerity.

The poppy is known for its bright red color. It is the symbol of relaxation and recovery and is believed that it can help you in treating many health problems and it has a calming effect on the nerves. 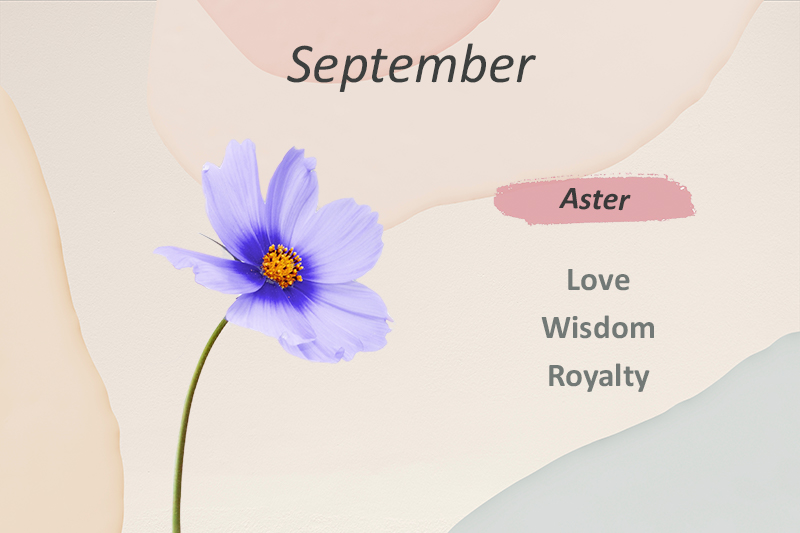 Also known as starworts or frost flowers,  asters are a symbol of all-powerful love, wisdom and royalty. They are originally named after the Greek word for star and the flower’s shape is reminiscent of a star.

The morning glory petals open in the morning, hence their name, to show off their beautiful, star-like centers. 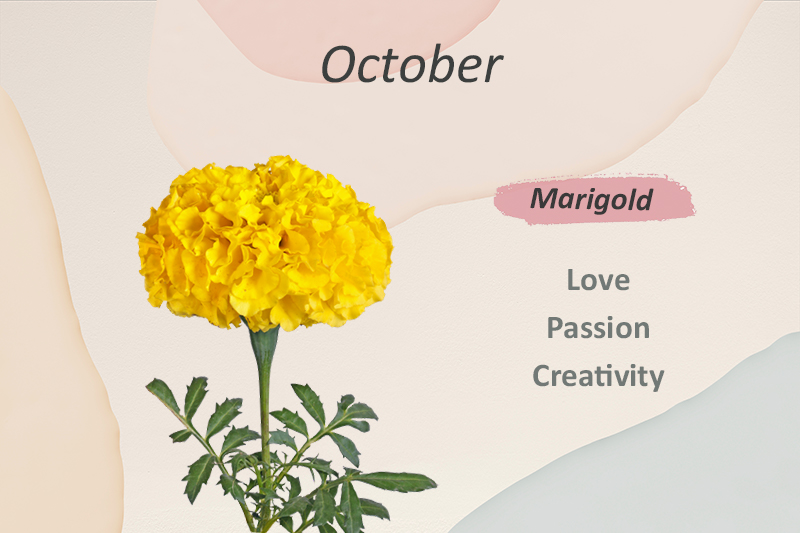 The Marigold is fitting for the month with its golden blooms that match the color of the autumn season. Marigolds symbolize fierce love, passion and creativity. In addition to their beauty, marigolds also have a long tradition of being used medicinally to heal inflammation and skin problems.

Another fragrant bloom, the bright Cosmos flower is a symbol of peace and tranquillity. They come in bright colors like orange, pink and purple. 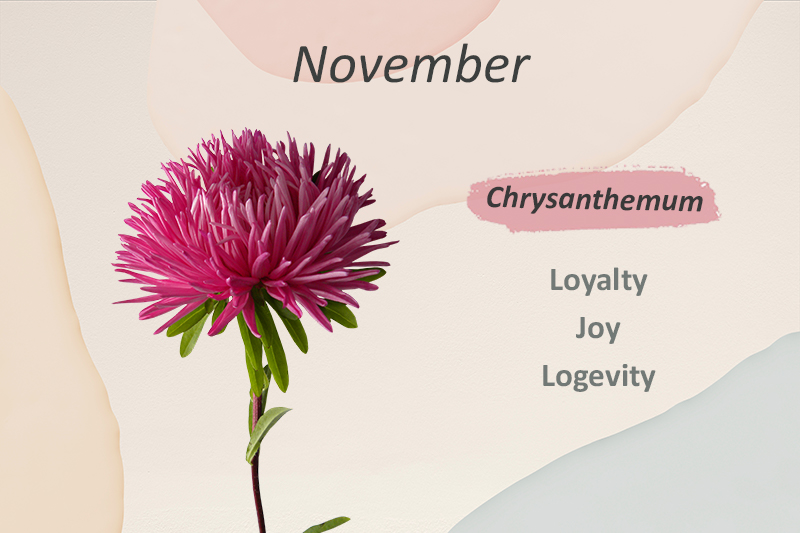 You can find the  Chrysanthemum in a wide range of sizes and colors, including the most common pink, white, yellow and red varieties. The meaning of this flower that was first cultivated in China around the 15th century is loyalty, joy and longevity. 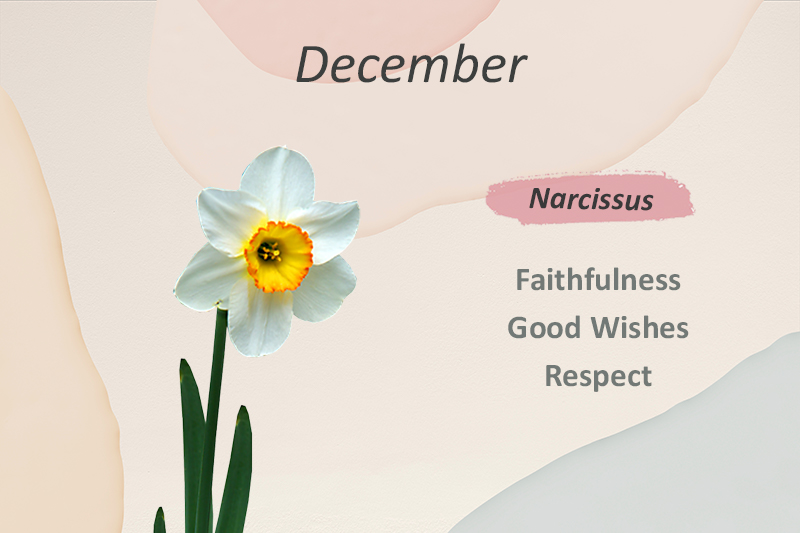 The narcissus is the birth flower for anyone who celebrates their special day in December. It is named after a character from Greek mythology. Narcissus was so deeply in love with himself that he drowned in a pool of water whilst admiring his own reflection. However, it stands for faithfulness, good wishes and respect. Most flowers of the narcissus genus bloom in the early spring but species like the paperwhite narcissus can be found in all their glory in cold winter months like December as well. Daffodils and jonquils are two common types of narcissus, but other flowers are also considered narcissus.

Holly is also often associated with this month and the festive season, and is a beautiful choice if you want to embellish your gift wrapping. For centuries holly has symbolized life, with its evergreen leaves. In a wreath, it symbolizes friendship and faithful love.

You can check out our collection of Birthday Flowers where you can choose from a variety of fresh blooms to surprise your loved ones for their special day.